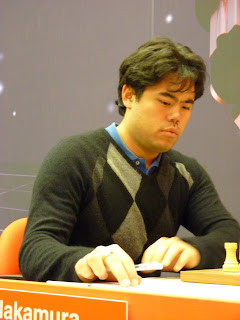 As predicted, Naka kicked some serious butt!
Hikaru Nakamura is the (sole) Champion of the 2011 Tata Steel Chess Tournament having outlasted World Champion Vishy Anand and a late charging World #1 Magnus Carlsen. Simply a superb performance and confirmation that he will be a real challenger for the World Champion title some day. (He has missed the window to be in the current cycle and will need to join next cycle.)
Congratulations Hikaru! And thank you for the excitement you bring to the game at the highest level.

1/30/11.  Aside from being 1/2 point back in second place after round 5, Naka was in first place through the entire tournament.  From start to finish he and World Champion Anand were tied / not tied / tied again for first until a round 11 win by Naka put him ahead by 1/2 point.  They both drew their last 2 games.

Hikaru had a performance rating of around 2900!  And now he is firmly in the top 10 in the world – I heard either #7 or maybe #5 after these results.  Wow!  I remember when he used to play in the New York State Open in Albany.  Some day he may be World Champion himself.