Rules for deciding Scholastic Player of the Year are as follows (10/4/2014 Board Meeting):

During the 2015-16 School Year, Right Move hosted several tournaments. But, only tournaments that has both rated and unrated sections are TRM 96 through TRM 108, MLK, and Miller. For any player, only the top 10 scores of these tournaments are taken into consideration in deciding Scholastic Player of the year.

Total points is not a sum of  points from all tournaments.  For example, a player might have attended 12 of the above tournaments. However, only top 10 scores out of these 12 tournaments are used in coming up with total points.

The top 20 players indicated below are based on the above rules. 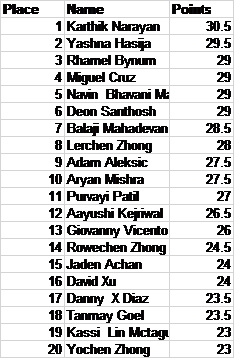